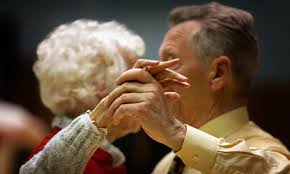 Anyone who has seen an episode of “Dancing With the Stars” knows that dancing is hard work. Dancing has long been viewed as an excellent way to stay active and physically fit, but a new study shows that dancing may also be a great way to keep our brains in shape!

Recently, major studies* have reported that dance could be a powerful way to improve brain health. Researchers have focused on the effect dancing has on the brain by measuring factors such as memory, sense of well being, stress levels and serotonin levels.

They found that while several different types of exercise are good for your overall health, one exercise had the biggest impact on improving overall cognitive skills. Care to guess what it was? That’s right, it’s dancing! It turns out that dancing incorporates several simultaneous brain functions like rational thinking, decision-making, and establishes an emotional sense of well-being.

Ready to Find your Fred? Click here for Fred Astaire Dance Studio locations near you.

Still not entirely sure how dancing improves brain health? Well stay with us, we’re about to get scientific!

Dr. Joseph Coyle, a Harvard Medical School psychiatrist, explains that the cerebral cortex and hippocampus parts of our brains are very elastic and they “rewire” themselves after each use. This means that those brain paths aren’t set in stone and we can lose them if we don’t use them.

Other studies have shown that areas of the brain most affected by aging can be engaged, rewired and utilized before they are lost. The good news is that dancing helps rewire our brains! The stimulation resulting from dancing can engage these areas in a positive way.

If you make an effort to try new things like dancing, you are opening up new pathways in the brain that improve mental capabilities. If you keep many brain pathways active and simultaneously generate new pathways, this will help maintain your brain’s health and fitness!

Here’s a quick look at a few activities and their protection against dementia:

The results are in…dancing is good for just about everything! Dust off those dancing shoes and start waltzing your way to a healthier brain.

*Those studies were done by the guys at the New England Journal of Medicine and Albert Einstein College of Medicine, if you were curious!