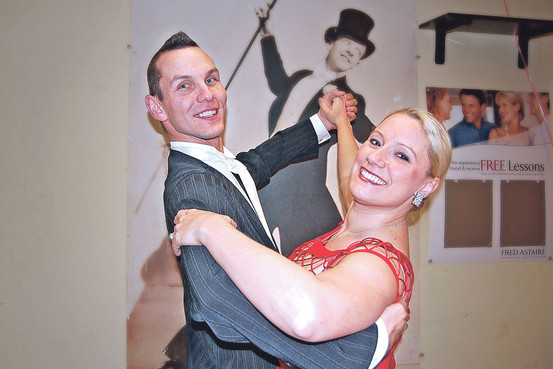 Picture this: John Travolta. White suit. Platform shoes. Finger pointed in the air.
Who can forget the movie that epitomized the 1970s? Disco balls and the Hustle were the theme of the decade, and have left a lasting impression on the world of dance ever since.

What many people don’t realize is that the Hustle actually has Latin origins set to a disco beat. The Hustle line steps were based on the popular Dominican dance, the Merengue! The Hustles was boarn in New York in the 1970s. Popular musician, Van McCoy, and the Soul City Symphony recorded the timeless hit “The Hustle” and set in motion the Hustle craze that took over the nation.

The Hustle went through many variations throughout the 70s, with line dances for groups of people, solo movements that came and went, and what many consider to be the “true Hustle,” partner dancing. It is the last authentic American partner dance to be born and cultivated here in the United States.

Interested in getting your “Saturday Night Fever” on? Here on same basic steps:

· Back four steps (start with the right foot)

· Quarter turn to the left (rotate on the left foot)

· REPEAT!!
Want to see it in action? Look no further than this 1975 version of the song and dance that spread like wildfire:

Still not sure what you’re doing? That’s okay! Bring your favorite dance partner down to your local Fred Astaire Dance Studios and we’ll have you hustling in no time.