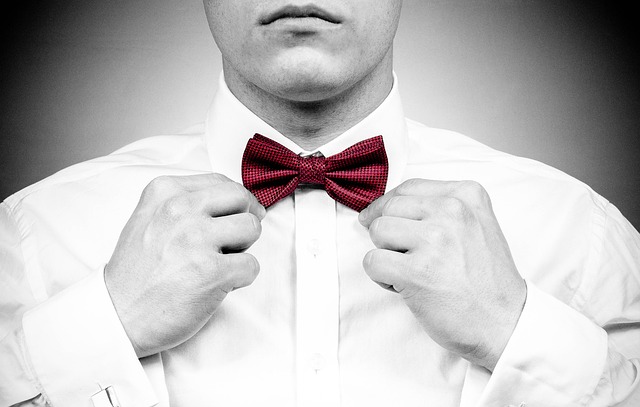 According to the National Bow Tie Day Website (also a thing!), “Once a year, every August 28th, thousands of men, women, & house pets all around the globe come together to celebrate an often under-appreciated accessory — the bow tie.”

For years the bow tie lived only in the realm of formal occasions. Lately though, this fashion-forward accessory has worked its way into more relaxed everyday wear, with men, women and even pets rocking the eye-catching attire.

Enter Fred Astaire: a dance legend and a fashion icon. His classic and elegant looks have captured the imagination of well-dressed men for decades. And boy, could he rock a bow tie!

Here are five of Fred’s fabulous looks — with his bow tie sharing the billing.

It doesn’t get much more classic than this number from 1935’s “Top Hat.” It’s the epitome of formalwear, complete with white tie. Astaire definitely did it big, did it right, and did it with style.

“The Babbitt and the Bromide”

This is a long one, but check out Astaire’s playful take on the tie in the second section of his three-segment dance challenge with Gene Kelly in 1945’s “Ziegfeld Follies.” Even out of formalwear, Fred made the bow tie look like class. Extra bonus points for the snazzy boater hat!

Now here’s our style hero wearing the classic black tie in a number from 1935’s “Roberta.” He looks more comfortable in that suit and bow tie than many people do in jeans! Maybe that’s because he was once quoted as saying: “I often take a brand-new suit or hat and throw it up against the wall a few times to get that stiff, square newness out of it.”

“A Couple of Swells”

Okay — so maybe not his most elegant look, but you’ve got to admit that the bow tie in this number from “Easter Parade” is fantastic! Even Judy Garland is sporting one. We love the take on Fred’s signature boutonniere as well.=

“How Could You Believe Me?”

Check out the bow tie in this comedy number? Can you see it? It’s super tiny, but the moves are big in this rousing number with Jane Powell in 1951’s “Royal Wedding.”

Don’t let your feet get “tied up” and tangled! Dance as zippy as you look with lessons at your local Fred Astaire Dance Studios!