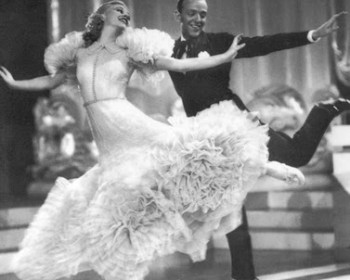 It’s only natural to be a little curious about the man behind the name. After all, he is a legend. So let’s get to it.

Fred was born in 1899 to Fritz and Ann Austerlitz. The Austerlitz Family lived in Omaha, Nebraska and he had a sister, Adele, who was 18 months his senior. She showed herself to be a natural dancer, while Fred displayed a similar natural ability for music as well as dancing.  When their mother saw their talent she started dreaming of moving to New York City so that they could perform as a brother-sister pair in vaudeville. An opportunity presented itself when Fritz unexpectedly lost his job.

So, Fred started dancing professionally at the age of 7 in NYC. The Austerlitz’s, now the Astaire’s had a few short lived failures but developed a successful dancing act in which Fred wore a lobster for its second half. The precocious sibling pair took over vaudeville in a matter of months, becoming its most well-known act.
The Astaire’s broke into Broadway in 1917 and were an immediate hit. Adele was considered the better dancer of the two until Fred was about 18 years old. But by 1930, Fred was regarded as one of the best tap dancers in the world. The brother-sister pair were wildly popular, appearing in 10 musicals on New York’s Broadway and in London, until the end of 1932 when Adele retired from dancing to get married.

After Adele, Fred was reluctant to be tied to another partner. He saw the opportunity to branch out and have more control over his dancing. He joined RKO Radio Pictures in 1932 and completed a screen test for RKO in 1933. The report on Fred according to him read, “”Can’t act. Slightly bald. Also dances”, a ludicrous result for a man many consider to be the best dancer to ever live. His swinging door of dancing partners abruptly ended when he danced with Ginger Rogers in Flying Down to Rio. Even Fred couldn’t deny the on-screen chemistry and box office success. They were the perfect pair.

In the end, the team of Astaire and Rogers made 10 musical films together. Eventually Fred left RKO to pursue opportunities at other studios as well as television. At that point in his career, Fred had changed the musical film genre for the better and had unrivaled independence when it came to his dance routines and choreography.

By 1957, Fred had appeared in 30 films in 25 years. As interest in musical films began to wane he declared his intentions to straight act. He did so, winning critical acclaim for his roles in On the Beach and The Towering Inferno.  However he never fully left the song and dance, creating Emmy award winning musical specials and acting in musical films into his late 60’s. His last film role was in 1981, at the spry age of 82. A few years later, Fred, a lion of his craft, finally retired from his career spanning 76 years.