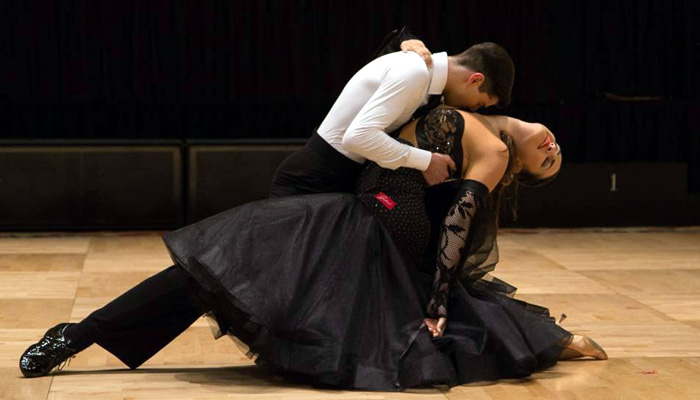 Competing in dancesport tournaments, you meet the best dancers the world has to offer. But that doesn’t intimidate the dancers on this list, who make up the top five American amateur couples to grace the dance sports stages in international competitions! As we prepare to celebrate America’s independence, let’s take a look at what makes America’s best amateur ballroom dancers so special:

This duo packs a lot of drama into their routines, and their faces are expressive and active enough to help carry the story their dancing is telling. In their most recent competition, which took place on April 2 in Baltimore, they placed first with an intense, skillful routine. Both dancers are originally from Denmark, and they have been partners since 2011. This video is from their performance at the U.S. Open Competition in Chicago, where they took first. They are currently ranked 72nd in the world, and number one in American couples!

These dancers have been competing together since 2014, but only two years in, they’re already a power couple. Their flowing, weightless style has earned them second place among American couples, and the 333rd ranking internationally. Fernando came from Spain, while Nicole grew up in the United States. Their last competition was the same Open tournament that Earle and Charlotte competed at, and they earned a ranking of third.

These two are originally from Romania, and transferred to the U.S. in 2013. They have been dancing together for about five years, and their chemistry shows through in their routines! They blend technical skill and attention to detail with surprising flair, which makes their dancing a thrill to watch.

For a couple so young, these two really know how to tear up a dance floor! The two just entered the adult age group, and they are proving a skilled match for their competitors. They have terrific technique, and all the raw materials for an awesome career of ballroom dancing. The more experience they gain, the better they will become! They are currently ranked 954th in the world, and fourth among American couples. This video is from their performance at the 2014 Youth Standard Waltz at the Manhattan Amateur Classic.

These two are fast-paced and fluid, and the effect on the audience is clear! As the fifth-placing American couple and the 980th in the world, these two young dancers are starting their professional careers off with a bang! Having only competed in the adult age group for the U.S. Open, they are already making waves. This was the same event as our first and second American couples, and Daniil and Emily ranked fifth!

American couples have made an excellent showing at dance sport competitions in recent years. Both the up-and-coming and the well-established couples we’ve mentioned here hopefully have many productive and exciting years of dance competition ahead of them! We look forward to seeing everything they accomplish as they make their country proud! And if this list has sparked an interest in dance sports for you, visit your local Fred Astaire Dance Studio to see how we can help you accomplish your goals!