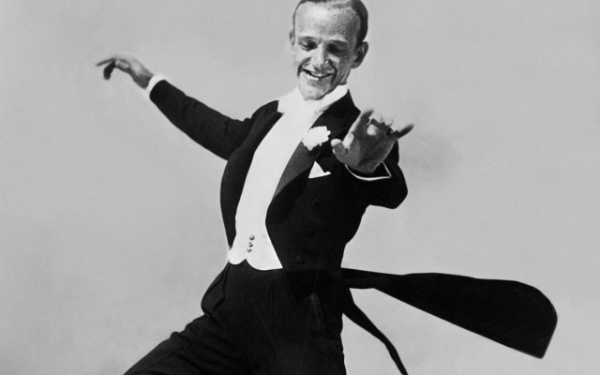 When a career spans 76 years, the impact is huge. This is something Fred Astaire knew firsthand. By the end of his life, he had become one of the most innovative and talented performers of all time, and years since, very few have matched his ability and creativity. We here at Fred Astaire Dance Studios know just how amazing of a performer he really was, and since his birthday is coming up on May 10, we thought it appropriate to share a bit about his life and what made him truly special.

This adorable number was from the film You Were Never Lovelier, which starred Fred Astaire alongside Rita Hayworth. The dance is classic and silly, and Fred even dances on his knees for some of it. Fred only danced with Rita in two features, but both were hugely popular, and this routine is one of many notable parts of the films!

The Spin to the Piano Lid from “Shall We Dance”

This dance is another charming number from Fred and Ginger Rogers. The move in question is a quick spin from the floor up to a piano lid, followed by a spin off and then the same move repeated on the other piano. Ginger makes it look easy, and Fred lets her claim the spotlight. The whole dance is worth a watch, but this move stands out as one of our favorites!

We couldn’t pick a favorite moment from this number! From the witty banter that starts it off, to the intricate ballroom/tap mix they perform, this video is four minutes of timeless fun. The mood goes from wistful to sarcastic on a dime, but their characters can’t stay mad at each other for long.

This one was recorded in what became Ginger and Fred’s last performance together, and is one of the rare color videos of them together. The number is from the work, The Barkleys of Broadway, filmed in 1949. The chemistry displayed here clearly came from the hours, weeks and years they had spent together, rehearsing for the many roles they played opposite each other throughout their careers. They were not only dance partners, but also best friends.

This dance was from a videotaped special Fred made with Barrie, An Evening with Fred Astaire, which was one of the first programs to be pre-recorded on color videotape. This special was one of a series of four, and this one won nine Emmys. Fred Astaire was 67 years old when he performed this number with Barrie Chase, but you can’t see it in his moves. He was still as lithe and agile as always!

Fred Astaire is widely recognized as one of the best performers who ever lived, and as a pioneer in televised dance performances. This collection of memorable moments is by no means exhaustive, but it gives us a great look back into what his career did to the art of dance performance. If you have any favorites, leave us a comment letting us know!