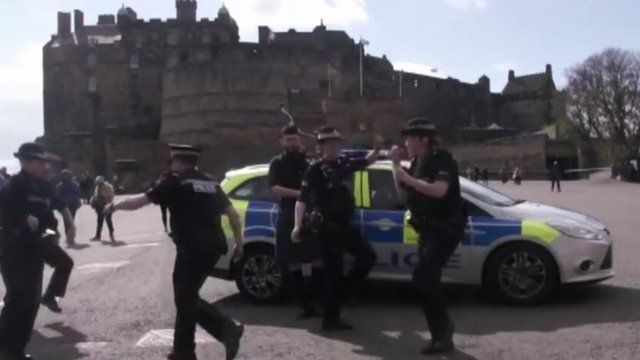 Summer is finally here! People are coming out of their winter hibernation, and several new dance trends are sprouting up around the country! If you’ve missed these so far, be sure to try them out at your next opportunity!

The “Running Man” was popularized by two players on the University of Maryland basketball team, Jaylen Brantley and Jared Nickens. It involves doing a variation of the “Running Man” dance to the song “My Boo” by Ghost Town DJ’s. Since the first video was released on YouTube, everyone and their mother has been trying it out! There have been some really unique takes on it, and recently, police departments around the world have been challenging other departments! It’s easy, it’s silly and it’s bringing out the competitive nature in people — could you ask for more?

For an international dance trend, we go to Saudi Arabia, where the “barbs” is becoming popular! The word “barbs” means uncoordinated in the Saudi dialect of Arabic. It’s a very simple dance, from a hit song that came out in late 2015. The dancer turns his feet one at a time, then lifts his chin, and finally begins to roll his body and step to one side. People all over have been doing their own interpretations, even adding their own elements. And with each new video, the number of people dancing seems to grow!

Another retro hit! Roller skate dancing is a growing fitness trend in places like New York City and Los Angeles, and roller disco events are seeing a resurgence in popularity. Roller skating has waxed and waned in popularity throughout the years, and recently, many skating rinks have begun to report a dramatic uptick in attendees. A recent roller disco event held at roller rink in Durham, North Carolina, saw more than 300 people attend. So keep an eye out, because dance on roller skates, in one form or another, could be coming to a rink or a gym near you!

This is a fun one, if a little misleading. Chicago rapper D-Low, who also popularized the “Bop” dance, packed this recent song with a host of challenges, but the best videos responding to the challenge are the ones that put their own spin on all of the dances. A quick Google search brings up several hundred thousand results on Vine, Facebook and YouTube, so this one doesn’t appear to be going anywhere for a while!

This challenging dance trend is not for the faint of heart — dancing on hoverboards is becoming a popular way to interpret music videos for recent pop songs, and while the moves make us jealous, we’re not sure we would try these! Hoverboards are hard enough to balance on, and when you add in handstands and lifts, you’ve got a dance form that’s beautiful, but terrifying. The video above features Kailey Maurer, Kelianne Stankus, Ciera Wilson, Diana Tatevossian and Donnakaran Tatevossian, who have teamed up for similar videos and have garnered several million views on YouTube in the past few months. Other similar performers include a break dancing hoverboard group, which has performed to songs like “WTF (Where They From)” by Missy Elliott and Pharrell Williams.

So there’s your rundown of the dance trends sweeping the nation this summer! We hope you’ll try out a couple, and be sure to put it up online! Fred Astaire Dance Studios offers room to practice all styles, plus a bunch of new friends to try them with, so be sure to visit!