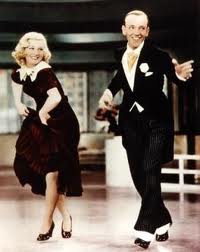 As the story goes, the Foxtrot originated from a vaudeville dancer and comedian by the name of Harry Fox, though Fox was just his stage name. The first to use the “slow step,” he helped create the new dance and then decided to lend his name to it as well.

It was around 1912. Ragtime music was taking off, and the freestyle use of the “slow step” came into vogue. Dancers broke free from the set patterns of older dances, and began ad-libbing as they cruised the floor with their partners. Fox’s unique style of using this “slow step” to trot to the new ragtime music was the birth of the Foxtrot, and took off as a new phase of ballroom dancing began.

Partners danced close together, the music was new and exhilarating, and older dances like the Polka, Waltz and the One-Step became less popular. However, by 1915, another change took place in the world of ballroom — new and melodic “pop” songs were being written.
These songs resembled tunes like, “Oh, You Beautiful Doll” and “Ida”, which were the smash hits of the day. People were quick to appreciate this change to a smoother, more rhythmic style of music, and their dancing began to absorb the better attributes of the older dances.

Since 1917, the accent has been placed on smoother dancing and individualized expression. By 1960, the international style of dancing began to make its way into the U.S. ballrooms and many of the techniques were implemented into the American style Foxtrot. The main difference between these two styles is that the international style Foxtrot is danced entirely in contact maintaining the normal dance hold, while the American style allows for complete freedom of expression utilizing various dance holds and positions.

With it is smooth and sophisticated feeling, the foxtrot is designed for the larger ballroom floor. The versatility and fast pace helped it become an extremely popular form of dance from the 1910’s through the 1940’s, and a fun one to learn at any level.

So dust off your ragtime tunes and check out the Foxtrot, you won’t be disappointed.