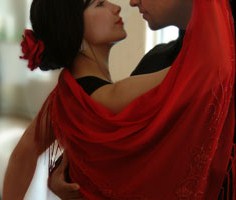 It was an instant hit in the dance world. It originated during the greatest period of the dance evolution in American history. I’m talking about Tango, of course.

Let me guess, you don’t think of Tango when you think of “ballroom dancing”? You’re not alone, but this fiery partner dance is, in fact, one more variety of ballroom dance.

It was around 1910 that the Tango made its first appearance, capturing attention with its intriguing, asymmetrical, and sophisticated dance patterns. They were a new take on dance, and added a much-needed touch of romance to the country’s dance repertoire.

Instantly popular among the public, historians still debate whether the Tango originated in Argentina, Brazil, Spain, or Mexico, but do know that it is a variation on an early Spanish folk dance, the Milonga, with traces of Arabic ancestry. Though we know it appeared in Argentina during the early 20th century, it is believed to have been danced all over Latin America.

A bold and captivating dance, it isn’t surprising that Argentine “gauchos” originally began dancing the Tango in the bawdy and high energy cafes of Buenos Aires. The Argentine and Cuban youth later changed the name from Milonga to Tango, and shifted the style to make the dance more acceptable to society.

The next change that came was when the Cuban dancers began incorporating habanera rhythms, which were syncopated. This strong music shift obscured the basic Milonga rhythm for a time, but after the dance caught on in Paris, the native style was reintroduced.

Now, the four beat Tango rhythm has endured in popularity, as the music and culture of Tango has become more universal, along with many types of sub-styles. In fact, the Tango is the only dance that was introduced in the early 20th century that continues to enjoy this much popularity.

The Tango is one of the most highly stylized ballroom dances today. It is a progressive dance where the flexed knees and staccato movement of the feet highlight the dramatic and exciting style of the dance.

The drama of this dance also stems from its measured crossing, flexing steps, and poised pauses. Though some dance the Tango with a loose embrace, this sizzling style is often danced quite close to your partner, making the tango a passionate and exciting dance to watch or take part in!