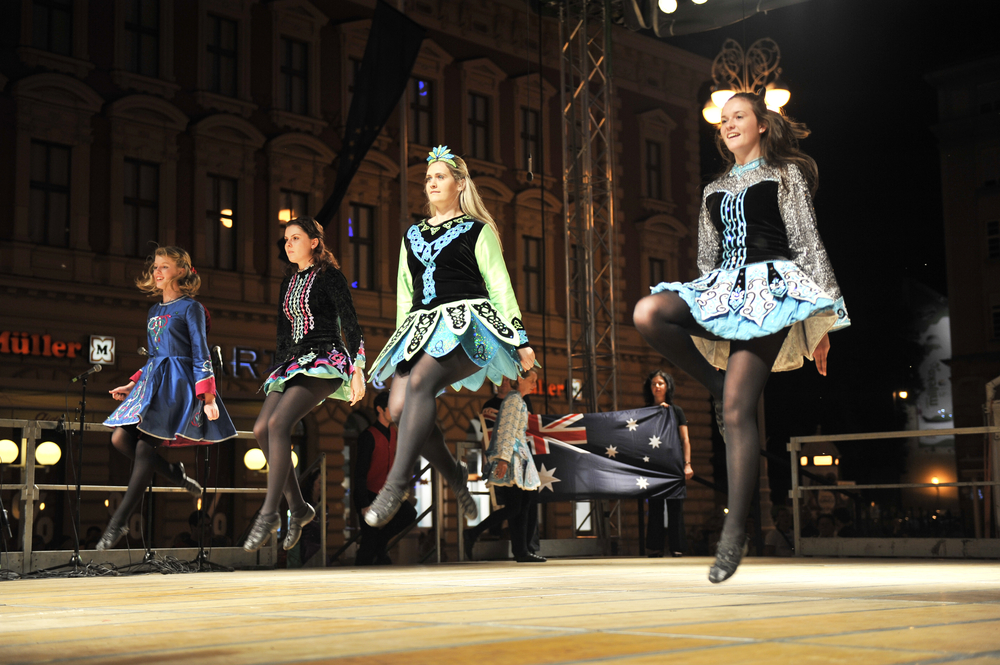 Despite the rollout of the vaccine and the lifting of many safety restrictions implemented last year at the beginning of the pandemic, Americans still remain cautious about gathering in large crowds. Traditional St. Patrick’s Day festivities, like parades, bar crawls, and big parties, are likely still canceled this year. Luckily, the rich history of St. Patrick’s Day provides a wealth of opportunities to create alternative celebrations that are fun for the whole family, including learning some new dances.

St. Patrick’s Day honors the patron saint of Ireland and is a global celebration of Irish culture. In addition to shamrocks, leprechauns, and green beer, Irish dancing is a big part of any St. Patrick’s Day gathering. The Irish jig is a folk dance performed solo, or with a large group, where dancers keep their torso rigid and rapidly tap their feet. Historians believe the Irish jig has Celtic roots. The Celtic people worshiped the sun by performing circular dances in a circle of stones. The jig evolved over time and became a staple of Irish clan marching tunes. Beginning in the 18th century, dancing masters promoted the jig by traveling the Irish countryside and making stops in towns to teach the dance to anyone who could afford lessons, the BBC reported. Dancing masters typically resided in the home of a local farmer and used the family’s barn to teach lessons.

In 1893, the Gaelic League was formed to promote Irish history and culture, propelling Irish dancing to become a symbol of the country’s heritage. Dance groups teach the tradition across the globe, and it is very common for children with Irish roots to participate in a local Irish dance group.

Modern Irish step dancing gained worldwide acclaim with the advent of groups like Riverdance and Lord of the Dance. Following a spectacular seven-minute television performance during the Eurovision Song Contest in 1994, Riverdance quickly became a household name. The Riverdance Show debuted in 1995 to sell-out crowds at the Point Theatre in Dublin, Ireland, and has been performed to crowds worldwide.

There are three main types of Irish dances performed today — set dancing, céilí and, sean nós routines. Set dance routines feature four couples and are similar to French quadrille dances. As part of the dance, performers swap partners and sides. The céilí is a dance performed with a large group of people. The sean nós is the flagship competition dance and was traditionally performed on tables or barrels. As part of this dance, each step is done twice, once with each foot, while the arms are held rigid.

Put some corned beef and cabbage in the slow cooker and pour a pint of Guinness before checking out these amazing Irish dancers in action.

A compilation of clips of Irish dancing wouldn’t be complete without one featuring the cast of Riverdance. Here is a performance of “Reel Around the Sun” at a show in New York.

The bride and flower girl at this wedding reception got their feet moving when they joined some young Irish dancers from Lancaster, Pennsylvania, to impress their guests.

Irish dancers charmed the crowd at a shopping center as a flash mob performed to support London Southend Airport in Essex, England.

Fred Astaire Dance Studios offers individual and group dance lessons online and at local studios. The dance franchisor specializes in ballroom dances hailing from countries around the world. If St. Patrick’s Day festivities and learning more about the beloved tradition of Irish dancing is making your feet tap, contact one of our local studios to schedule a lesson.