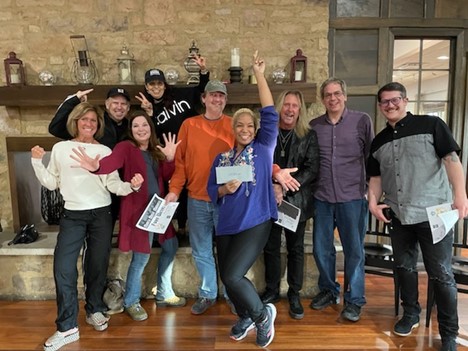 For the month of March, Fred Astaire Dance Studios put a twist on March Madness — and collaborated with local businesses to host a March MUSIC Madness “battle of the bands” event to celebrate resident talent and the reopening of popular local restaurants, Shorty’s and The Bogey.

“People have been wary of going out to eat again because of the pandemic,” said studio owner Pamela Baragona. “This was a great way to encourage people to enjoy eating out again while also supporting local bands.”

Participating voters received deals from event sponsors, including two free dance lessons and a one-week dance pass from Fred Astaire Dance Studios of Powell. Pinot’s Palette and Title Boxing Club of Powell also proudly sponsored the event with deals of their own. Pinot’s Palette provided voters 10 percent off in-studio classes (purchased online), and Title Boxing Club offered three classes for $19 or two weeks of Unlimited Classes for $29.99 (applied to the second month of any package purchased at the location in Powell).

“Overall, it was a spectacular event,” said Baragona. “Both restaurants were full and in high spirits. Many unfamiliar faces came out to support their favorite artists — for three of the finalists, this was their first show in a year!”

The community of Powell came together to celebrate spring, the reopening of local favorite dining spots, and the arts. Fred Astaire Dance Studios has always been an active member of the community and loved supporting the local band scene. The success of the March Music Madness event allowed everyone to have fun again after a tumultuous year.

“People were happy to get up from their tables and dance!” said Baragona. “It was emotional watching everyone singing along and laughing together — seeing people connect. This event was a way forward for everyone and it was needed.”

Co-founded in 1947 by the legendary Fred Astaire, our studios set the standard of excellence in dance instruction. Fred Astaire Dance Studios has ballroom and Latin style dance lessons for all ages and abilities in a fun, friendly atmosphere. Our unique method of instruction will allow you to learn dances from the foxtrot to salsa faster and more easily than you could anywhere else. Our mission is to enrich the lives of anyone and everyone who is associated with our company and to become your community dance studio.