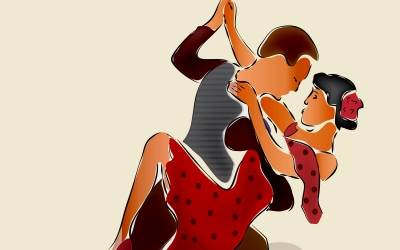 If you hear the strains of Salsa music over the next few days, make sure to look up from your phone, because you are in for a treat. To celebrate National Ballroom Dance Week, flash mobs will be popping up across the country performing the Salsa.

In case you’re not familiar with this engaging trend, a flash mob is a large, public gathering where people perform an unusual or random act — like dancing! They’re typically organized via social media. Flash mobs aren’t new — the first flash mob debuted at a Macy’s Department Store in New York in 2003 — but the element of surprise and entertainment continues to delight people lucky enough to witness one. Ballroom dancing has provided many artists with subject matter for flash mobs worldwide.

Check out this surprise Salsa performance at a train station in Copenhagen.

Folks on their lunch breaks had a reason to smile when they saw these dancers who showcased their Swing skills while crossing a busy New York street.

USA Dance, a nonprofit organization devoted to promoting ballroom dancing, spearheads the NBDW celebrations nationwide. The flash mob has become an annual tradition for USA Dance chapters to promote the unique and timeless sport. In addition to numerous events and activities at local studios during this week, the flash mob engages and entertains community members, helping to increase enrollment and garner interest in dance.

A group of flash mob dancers performed the Cha-Cha in 2017 at a mall in Beckley, West Virginia.

Take a quick peek at a group of dancers from Pompano Beach, Florida, performing the Swing in 2018.