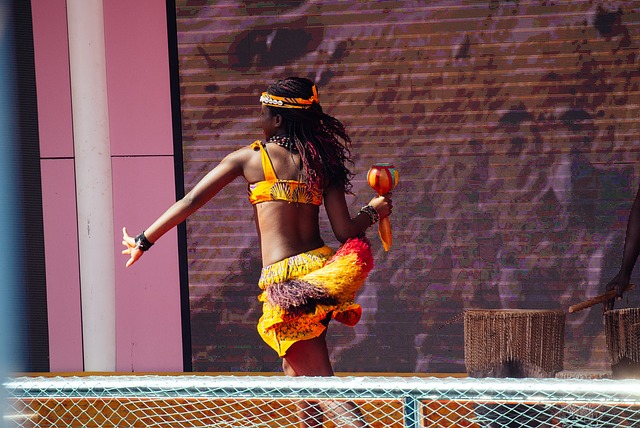 Get in the swing of things and celebrate Kwanzaa by learning a modern-day ballroom dance derived from Africa’s rich heritage.

Kwanzaa is an annual celebration of African culture and heritage that starts the day after Christmas and ends on January 1 with a gift exchange and large feast. The week-long holiday celebrates African-American traditions and pays homage to the diaspora of sub-Saharan African cultures worldwide. Africa covers one-fifth of the world’s land area and is composed of 53 different countries, according to New World Encyclopedia. During Kwanzaa, named for a Swahili phrase meaning “first fruits of the harvest,” each day features an important theme, including unity, self-determination and creativity.

Many of Kwanzaa’s celebrations include performances of tribal dances with music featuring lively drumbeats. Dancing is an important component of African culture and is incorporated into tribal rituals, rites of passage and social gatherings. Traditional African dances are varied, but share a common theme of spirited and vigorous movements.

Visit your local Fred Astaire Dance Studios to celebrate Kwanzaa and learn ballroom dances that roared onto the scene as African influence started playing a major role in American culture. Ballroom dancing moved mainstream in the 1920s and the influence of African culture is evident in new dances that swept the country. The Charleston, a social dance with jazz influences, is characterized by toes-in, heels-out twisting steps. Other popular dances with African roots include tap dancing, the lindy hop and jitterbug.

Fred Astaire Dance Studios helps enrich the lives of people of all ages and stages through the positive, transforming power of dance. Learning to dance improves physical fitness, emotional health and provides a social and fun atmosphere.

In this clip, dancers showcase their moves at a Kwanzaa celebration.

African traditions helped shape modern-day ballroom dancing. In this clip from the 1941 film, “Hellzapoppin,” dancers perform the lindy hop. The lindy hop originated in the Harlem area of New York City and is a joyful jazz dance featuring elements of swing dancing.

Sophie Ellis-Bextor and Brendan perform the Charleston to “Rock It For Me,” a song released in 1938 on “Strictly Come Dancing, a British dance show.

Sign up for dance lessons at your local Fred Astaire Dance Studios to learn how dances from across the globe helped shape our culture and December holiday festivities.